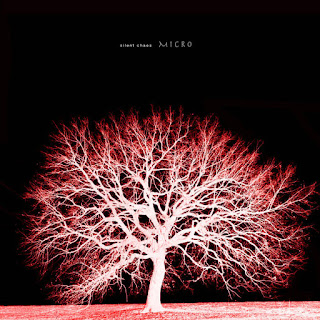 "Micro" is the first installment in a two-part effort By SILENT CHAOS;
An Experimental/Dark Ambient duo hailing from Rome, Italy. According to
project members Marta Noone and Ugo Vantini the album will be followed
by a sequel titled "MACRO." Within these two albums the main concept is
the exploration of evocation. Archetypes that seem to have always been
buried within the collective unconscious of humanity are dissected,
Evaluated, Organized and re-processed into sonic form via modular synths,
Sequencers and looping/sampling devices. Each track delves into it's own
aural narrative...An audio world that serves as a fully immersive experience
for the listener. Like astral travel for your ears. Elements of true Industrial
music flirt with ancient musical practices from various traditions spanning the
globe to tap into the primal essence that SILENT CHAOS has put under their
"Micro"-scope.

I.) ODYSSEUS'S JOURNEY:
"Odysseus's Journey" begins with meditative drones created by a resonant synth
note in repetition. An echoing pulse is set in-between wavering patterns. A slow
climb over and within. Wet textures bubble, Swirl and begin to drip. The waters
stir as we hear what sounds like metallic and glass objects being used to create
loose percussive elements. All of this combined creates a sense of movement...As
if an unseen figure is in preparation for their daring departure. I imagine a
ragged makeshift vessel as it sets out over darkening tides. The initial drones
become more intense and take a darker turn. Distant voices echo as if through
some cavernous region of salt and limestone. Deep bass tones fill the atmosphere
with a trembling air of mystery as strange buzzing noises guide us towards loud
textures that sound like the rusted hinges of ancient gates swinging open. Perhaps
within is contained the knowledge/enlightenment that SILENT CHAOS are seeking. The
atmosphere is strong and pervasive. Cut-off filters are utilized at perfect times
to transition from one area to the next. Junk percussion's in true Industrial fashion
are present while what was once tranquil ambient twists and turns into much tenser
and darker explorations. The music sounds atmospheric in the truest sense of the word.
SILENT CHAOS are mapping out audio realities and guiding us on a tour into places that
just moments ago only existed in the imagination...Or at the very least, Not in the room
in which I'm sitting in as I write this. Any artist that can turn sitting in your room
with headphones on into a sonic journey to this extent deserves attention in my opinion.
Midway in things shift into near silence. Soon after we are met with pummeling Industrial
percussion's that have a truly unique sound. Deep and heavy "drums" wrapped in very strange
wet effects are featured. Each time the rhythms hammer away they are followed by wet textures
that sound like a heavy object plummeting into deep waters. Unearthly choirs arise like specters
within gathering fog. Their voices are mournful and leave long trails of woe behind them. As a
whole the composition and arrangement are fantastic here. If you're into Dark Ambient artists
from labels like Cryo Chamber, Cyclic Law, Cold Spring, Malignant Records, Etc, Then I'd highly
recommend checking this release out. "Odysseus's Journey" is cold, Dark, Isolationist music at
it's finest. Sub-sonic vibrations and descending synths end the track as we fade out and into
"Ab Origenes."

II.) AB ORIGENES:
Plodding rhythms in low dense tones make way for slamming iron door percussion's. It feels like
you're being locked inside some forsaken dungeon in the middle of nowhere. Crackling electronics
create a sound similar to the crackling wood of a small fire. Heavy atmospheres are conjured via
rolling waves of negative emanation. A thick static haze slowly engulfs and retreats like a hungry
tide as sub-bass vibrations boom in the distance. Electronic signals and wobbling Electro Industrial
patterns meet with ringing metallic eeriness that could easily feel at home in a horror film. Aboriginal
instruments (Or at least synthetic ones) are featured. As stated previously, SILENT CHAOS are attempting to evoke themes that have long been present, Dormant, and resurfacing within myriad indigenous and native cultures all around the world since the dawn of man. Here we have something that sounds very much like the didgeridoo used to create low humming drones. This serves as the backbone from which invisible strands of sound branch forth like arteries carrying death rattles, Menacing metallic resonance, And varying other forms of sonic dread up and outward. There is a very dark tribal sound here. Primal and fierce in execution. Like some lost rite or ritual resurrected through electronic means and manipulations that create a sound both captivating and terrifying. There is a lot of movement here. It sounds like everything around you is restless as if it's laid in wait for countless centuries and finally has been granted passage into our existence. An audio awakening of the primal spirit within man. A breaching of the seen and unseen. A lifting of several
veils.

III.) TECHNOLOGICAL MONK:
"Technological Monk" sounds like a fitting description of the project's members. Sonic shamans who
bring the ancient and forgotten to new life through digital means. The track starts out with ringing
chimes, Cracking static, Industrial textures, and percussive hand instruments. If you're a fan of
artists like SHIBALBA, NORDVARGR, YEN POX, FUNERARY CALL, Etc, You'll likely find much that appeals to you here. Powerful drones come in dense pulses as electronic experimentation populates the empty space. Tribal percussion's mix with wandering avant-garde electronics that take the noise music equivalent of a free jazz approach. There are tons of weird glitching sounds as well as excellent Cyberpunk elements thrown into the mix. To be perfectly honest with you I've never heard a track attempting this kind of hybrid that was as successful as this. Absolutely incredible material and
a definite highlight on the album. It totally catches you by surprise. Thinking back it's almost
like you knew it was coming but the message was vague and not yet understood until it arrives like
a brilliant revelation. Towards the end things wind down into resonant atmospherics and clanging
loose percussion's. Synths stretch, Settle, Writhe and recoil as we enter a grim minimal soundscape.
Feedback and sub-sonic rumbling compete for space until a brief silence prepares us for the next track.

IV.) INSANIA:
"Insania" in many ways feels like a kind of continuation of certain themes explored in the previous
track. Most notably the experimental electronic qualities. Here we are mesmerized by countless sounds. A sort of kaleidoscope of sonic tendencies. Synth pulses charge, Unleash and recharge as stabbing electrical freakouts and heavy Electro Industrial and Glitch techniques fill the room. Break-beat and Hard Techno elements are combined with spacey sci-fi synth effects. The synths used sound
quite stunning as they oscillate and annihilate your grounding and sense of the norm. Comfort
zones are quickly filled with hectic rushes and whirls of sound that make the room spin and
the heart race in curious excitement and cautious indulgence. This piece more than lives up
to it's title. I've honestly spent a long time searching the underground for something of this
caliber and right when I least expected it, SILENT CHAOS shot me an email. I am so excited to
be able to tell you about this release. It's both an honor and a privilege. "Insania" is very
difficult to put into words, But the best way I can describe this is as follows. Take everything
you love about experimental electronic music and cram it into one five and a half minute track.
Now imagine diving in and letting these sounds obliterate and disintegrate you into infinite pieces
that re-assemble and break apart in a cycle of ecstasy, Fear and elevation. That's what this sounds
like. It seems that SILENT CHAOS are attempting to bring the listener into their own brand of higher
consciousness. The realm of metaphysics interpreted as a listening experience. Many artists have
attempted this idea for many years...But few have been as successful as SILENT CHAOS.

V.) ELEUSI:
Closing track "Eleusi" comes on turbine blades that create a forceful vortex that transcends your
usual windswept isolationist ambient. Heavy electronics and creaking vibrations dissipate into
thick synths and vapor atmospheres. Metallic industrial is heard through reaching strands of
black atmosphere. It sounds like you've entered a negative plane devoid of sunlight. No blue
skies or puffy white clouds here. This is a place where scavengers pick at the carcass of a
scorched earth where no human footprint has been detected for aeons. Lifeless, Yet full of
activity. A kingdom for carrion. Electronic rhythms create a ping-pong effect as sounds
bounce back and forth between the speakers. Harsh waves come like desert sands storming
down from miles above the earth. Afterwards we find ourselves surrounded by glitching
electronic experimentation. Every manner of electrical pulse, Signal and digital manipulation
are on display. At times I am greatly reminded of COIL's more glitchy works. Songs like "NASA/
Arab" or "AYOR" come to mind. Again we have a didgeridoo type instrument along interesting loops
and rhythms. Later we go into more straightforward Dark Ambient/Drone territory until it's broken
by further glitches and manipulations alongside distant synth/string ambient that brings an emotionally evocative sub-melody. Like the nostalgia of a pleasant dream that's slowly being overtaken by suppressed nightmares and primal fear. In complete honesty, This is one of those albums you have to experience for yourself. I can think of few better records this year that offer such immersive soundscapes. As if the whole experience is being washed away, The album ends with the sound of falling rain as all fades into silence. Dreamworlds brought to life by simply pressing play. Phenomenal material.